Effects of weather-related episodic events in lakes: an analysis based on high-frequency data 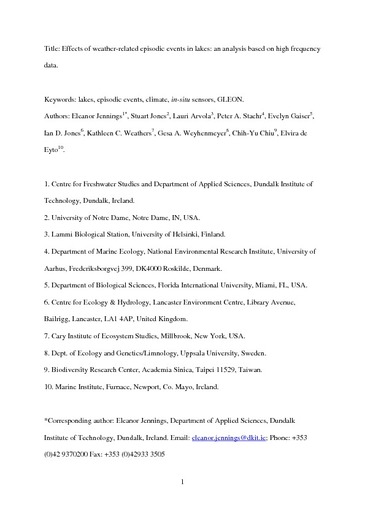 Summary 1. Weather-related episodic events are typically unpredictable, and their duration is often short. Abiotic and biological responses are often missed in routine monitoring. These responses are, however, now of particular relevance given projected changes in extreme weather conditions. 2. We present data from high-frequency monitoring stations from lakes in Europe, North America and Asia that illustrate two classes of abiotic effects of weather events: (i) generally short-lived effects of storms on lake thermal structure and (ii) the more prolonged effects of high rainfall events on dissolved organic matter levels and water clarity. We further relate these abiotic effects to changes in dissolved oxygen or in chlorophyll a levels. 3. Three differing causes for weather-related decreases in surface dissolved oxygen levels were observed: (i) entrainment of anoxic water from depth, (ii) reduction in primary productivity and (iii) increased mineralisation of organic carbon delivered from the catchment. 4. The duration of in-lake effects tended to be longer for events driven by weather conditions with a longer return period, that is, conditions that were relatively more severe and less frequent at a site. While the susceptibility of lakes to change was related in part to the severity of the meteorological drivers, the impacts also depended on site-specific factors in some cases. 5. The availability of high-frequency data at these sites provided insight into the capacity of the lakes to absorb current and future pressures. Several of the changes we observed, including increases in carbon availability, decreases in photosynthetically active radiation and increased disturbance, have the capacity to shift lakes towards an increased degree of heterotrophy. The magnitude and direction of any such change will, however, also depend on the magnitude and direction of climate change for a given location and on lake and catchment characteristics.