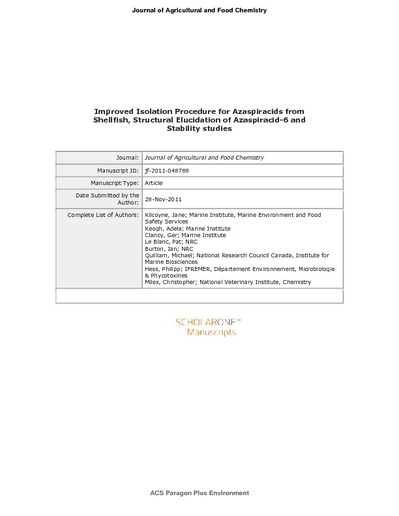 Azaspiracids are a group of lipophilic polyether toxins produced by the small dinoflagellate Azadinium spinosum. They may accumulate in shellfish and can result in illnesses when consumed by humans. Research into analytical methods, chemistry, metabolism, and toxicology of azaspiracids has been severely constrained by the scarcity of high-purity azaspiracids. Consequently, since their discovery in 1995, considerable efforts have been made to develop methods for the isolation of azaspiracids in sufficient amounts and purities for toxicological studies, in addition to the preparation of standard reference materials. A seven-step procedure was improved for the isolation of azaspiracids-1–3 (1, 2, and 3) increasing recoveries 2-fold as compared to previous methods and leading to isolation of sufficiently purified azaspiracid-6 (6) for structural determination by NMR spectroscopy. The procedure, which involved a series of partitioning and column chromatography steps, was performed on 500 g of Mytilus edulis hepatopancreas tissue containing 14 mg of 1. Overall yields of 1 (52%), 2 (43%), 3 (43%), and 6 (38%) were good, and purities were confirmed by NMR spectroscopy. The structure of 6 was determined by one- and two-dimensional NMR spectroscopy and mass spectrometry. The stability of 6 relative to 1 was also assessed in three solvents in a short-term study that demonstrated the greatest stability in aqueous acetonitrile.

This document is the unedited author's version of a Submitted Work that was subsequently accepted for publication in Journal of Agricultural and Food Chemistry, copyright © American Chemical Society after peer review. To access the final edited and published work, see DOI: 10.1021/jf2048788
peer-reviewed