Fitness reduction and potential extinction of wild populations of Atlantic salmon, Salmo salar, as a result of interactions with escaped farm salmon 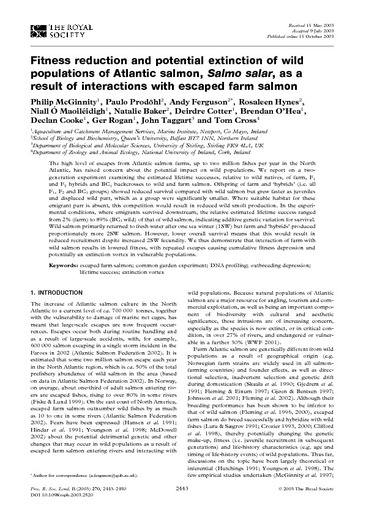 The high level of escapes from Atlantic salmon farms, up to two million fishes per year in the North Atlantic, has raised concern about the potential impact on wild populations. We report on a twogeneration experiment examining the estimated lifetime successes, relative to wild natives, of farm, F1 and F2 hybrids and BC1 backcrosses to wild and farm salmon. Offspring of farm and ‘hybrids’ (i.e. all F1, F2 and BC1 groups) showed reduced survival compared with wild salmon but grew faster as juveniles and displaced wild parr, which as a group were significantly smaller. Where suitable habitat for these emigrant parr is absent, this competition would result in reduced wild smolt production. In the experimental conditions, where emigrants survived downstream, the relative estimated lifetime success ranged from 2% (farm) to 89% (BC1 wild) of that of wild salmon, indicating additive genetic variation for survival. Wild salmon primarily returned to fresh water after one sea winter (1SW) but farm and ‘hybrids’ produced proportionately more 2SW salmon. However, lower overall survival means that this would result in reduced recruitment despite increased 2SW fecundity. We thus demonstrate that interaction of farm with wild salmon results in lowered fitness, with repeated escapes causing cumulative fitness depression and potentially an extinction vortex in vulnerable populations.