An evaluation of the impact of early infestation with the salmon louse Lepeophtheirus salmonis on the subsequent survival of outwardly migrating Atlantic salmon, Salmo salar L., smolts 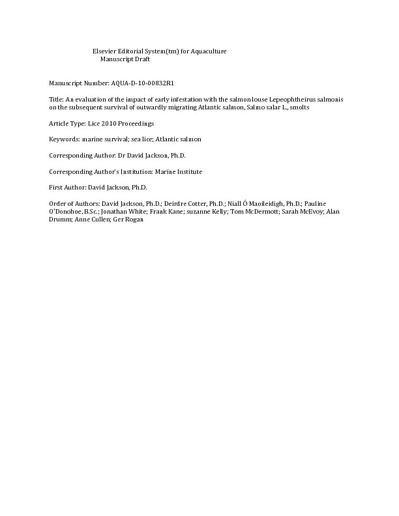 The potential impact of sea lice infestation on outwardly migrating Atlantic salmon smolts has been investigated by treating populations of ranched salmon, prior to release, with a prophylactic sea lice treatment conferring protection from sea lice infestation, for up to 9 weeks. Established populations of ranched Atlantic salmon with well described rates of return were chosen to investigate the potential contribution of early infestation with the salmon louse, Lepeophtheirus salmonis to mortality in Atlantic salmon. Against a backdrop of a declining trend in survival rates of Atlantic salmon many studies are attempting to elucidate potential causes for this decline. Results from this study over a period of 9 years point to infestation with the salmon louse (L. salmonis) as being a minor component of marine mortality in the stocks studied.

NOTICE: this is the author’s version of a work that was accepted for publication in Aquaculture. Changes resulting from the publishing process, such as peer review, editing, corrections, structural formatting, and other quality control mechanisms may not be reflected in this document. Changes may have been made to this work since it was submitted for publication. A definitive version was subsequently published in Aquaculture, [VOL320, (November 2011)] doi:10.1016/j.aquaculture.2011.03.029, http://www.sciencedirect.com/science/article/pii/S004484861100247X
peer-reviewed