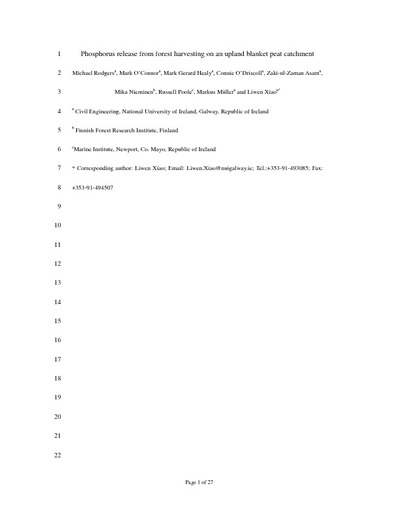 The aim of this study was to investigate the release of phosphorus (P) to receiving waters resulting from harvesting 34-year-old lodgepole pine trees in an upland peat catchment. The study site was within a 25.3-hectare (ha) area, and was drained by a stream that received flows from ploughed furrows, mainly, via collector drains, and discharged directly to the salmonid Shrahrevagh River, Burrishoole, Co. Mayo, Ireland. The study site was divided in two parts: the upstream part was left intact and the downstream part was harvested in early Autumn 2005 following implementation of forest guidelines. Good management practices such as proper use of brash mats and harvesting only in dry weather were implemented. Two instrumented stations were established – one just upstream (US) and the other just downstream (DS) of the clearfelled area. The measurement of P concentrations at the two stations commenced in May 2005, two months before the harvesting started. The daily mean P concentration at the DS station increased from about 6 μg L-1 of total reactive phosphorus (TRP) during pre-clearfelling to 429μg L-1 in August 2006. By October 2009, four years after clearfelling, the P concentrations at the DS station had returned to pre-clearfelling levels. In the first three years after harvesting, up to 5.15 kg ha-1 of TRP were released from the harvested catchment to the receiving water; in the second year alone, 2.3 kg ha-1 of TRP were released. Linear regression can be used to describe the relationship between TRP load and water discharge. About 80 % of the total phosphorus (TP) in the study stream was soluble and more than 70 % of the P release occurred in storm events, indicating that traditional buffer strips with widths of 15-20 m might not be efficient for P immobilization. The P concentrations were affected by antecedent weather conditions and highest concentrations occurred during storm events following prolonged drought periods. The water extractable phosphorus (WEP) contents in the soil were significantly higher below windrow/brash material than in brash-free areas, and whole-tree harvesting should be studied as one of the means to decrease P export from blanket peats.

NOTICE: this is the author’s version of a work that was accepted for publication in Forest Ecology and Management. Changes resulting from the publishing process, such as peer review, editing, corrections, structural formatting, and other quality control mechanisms may not be reflected in this document. Changes may have been made to this work since it was submitted for publication. A definitive version was subsequently published in Forest Ecology and Management, [Volume 260, Issue 12, (15 December 2010)] doi:10.1016/j.foreco.2010.09.037 http://www.sciencedirect.com/science/article/pii/S0378112710005797
peer-reviewed