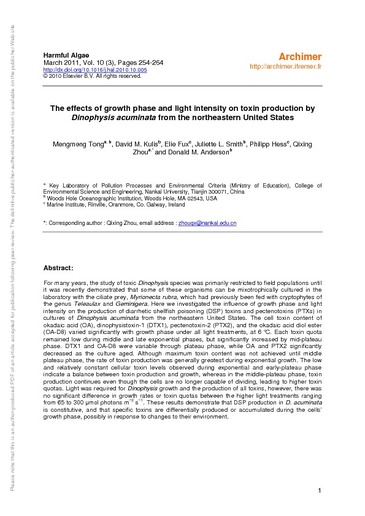 For many years, the study of toxic Dinophysis species was primarily restricted to field populations until it was recently demonstrated that some of these organisms can be mixotrophically cultured in the laboratory with the ciliate prey, Myrionecta rubra, which had previously been fed with cryptophytes of the genus Teleaulax and Geminigera. Here we investigated the influence of growth phase and light intensity on the production of diarrhetic shellfish poisoning (DSP) toxins and pectenotoxins (PTXs) in cultures of Dinophysis acuminata from the northeastern United States. The cell toxin content of okadaic acid (OA), dinophysistoxin-1 (DTX1), pectenotoxin-2 (PTX2), and the okadaic acid diol ester (OA-D8) varied significantly with growth phase under all light treatments, at 6 °C. Each toxin quota remained low during middle and late exponential phases, but significantly increased by mid-plateau phase. DTX1 and OA-D8 were variable through plateau phase, while OA and PTX2 significantly decreased as the culture aged. Although maximum toxin content was not achieved until middle plateau phase, the rate of toxin production was generally greatest during exponential growth. The low and relatively constant cellular toxin levels observed during exponential and early-plateau phase indicate a balance between toxin production and growth, whereas in the middle-plateau phase, toxin production continues even though the cells are no longer capable of dividing, leading to higher toxin quotas. Light was required for Dinophysis growth and the production of all toxins, however, there was no significant difference in growth rates or toxin quotas between the higher light treatments ranging from 65 to 300 μmol photons/sq.m/s. These results demonstrate that DSP production in D. acuminate is constitutive, and that specific toxins are differentially produced or accumulated during the cells’ growth phase, possibly in response to changes to their environment.

Peer Reviewed. NOTICE: this is the author’s version of a work that was accepted for publication in Harmful Algae. Changes resulting from the publishing process, such as peer review, editing, corrections, structural formatting, and other quality control mechanisms may not be reflected in this document. Changes may have been made to this work since it was submitted for publication. A definitive version was subsequently published in Harmful Algae, [Volume 10, Issue 3 (March 2011)] doi:10.1016/j.hal.2010.10.005 http://www.sciencedirect.com/science/article/pii/S1568988310001198
peer-reviewed