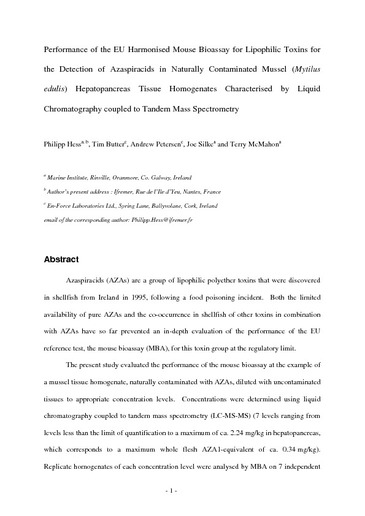 Azaspiracids (AZAs) are a group of lipophilic polyether toxins that were discovered in shellfish from Ireland in 1995, following a food poisoning incident. Both the limited availability of pure AZAs and the co-occurrence in shellfish of other toxins in combination with AZAs have so far prevented an in-depth evaluation of the performance of the EU reference test, the mouse bioassay (MBA), for this toxin group at the regulatory limit. The present study evaluated the performance of the mouse bioassay at the example of a mussel tissue homogenate, naturally contaminated with AZAs, diluted with uncontaminated tissues to appropriate concentration levels. Concentrations were determined using liquid chromatography coupled to tandem mass spectrometry (LC-MS-MS) (7 levels ranging from levels less than the limit of quantification to a maximum of ca. 2.24 mg/kg in hepatopancreas, which corresponds to a maximum whole flesh AZA1-equivalent of ca. 0.34 mg/kg). Replicate homogenates of each concentration level were analysed by MBA on 7 independent occasions over 6 weeks. Inhomogeneity between replicate aliquot portions was evaluated using LC-MS-MS and ranged from 1.8 to 6.6% RSD for the six levels contaminated above quantification limits. This variation was similar to the variability of the LC-MS-MS method within a batch, and the difference between replicate aliquots could thus be considered negligible. Other uncertainties considered in the study included the short- and long-term variability of the LC-MS-MS method, toxic equivalence factors, relative response factors in mass spectrometric detection, additional analogues and matrix effects. A concentration-response curve was modelled as a 4-parametric logistic fit to a sigmoidal function, with an LC50 of 0.70 mg AZA1-equivalent/kg hepatopancreas tissue. Furthermore, the mathematical model of the lethality data from this study suggests that occasional negative mouse assays at high concentrations, previously observed in the Irish statutory monitoring, are at least partly due to the biological variation of mice and can be understood on a statistical basis. The mathematical model of the concentration-response curve also describes the probability of a positive mouse bioassay at the current regulatory limit of 0.16 mg/kg to be ca. 95%. Therefore, it appears that the mouse bioassay performs very well in the implementation of this limit. Hence, the present study very strongly suggests that the MBA and LC-MS-MS techniques can be considered equivalent in the implementation of the current regulatory limit of 0.16 mg/kg for Azaspiracids in shellfish.

NOTICE: this is the author’s version of a work that was accepted for publication in Toxicon. Changes resulting from the publishing process, such as peer review, editing, corrections, structural formatting, and other quality control mechanisms may not be reflected in this document. Changes may have been made to this work since it was submitted for publication. A definitive version was subsequently published in Toxicon, [Volume 53, Issues 7-8 (June 2009)] doi:10.1016/j.toxicon.2009.02.015 http://www.sciencedirect.com/science/article/pii/S004101010900110X
peer-reviewed