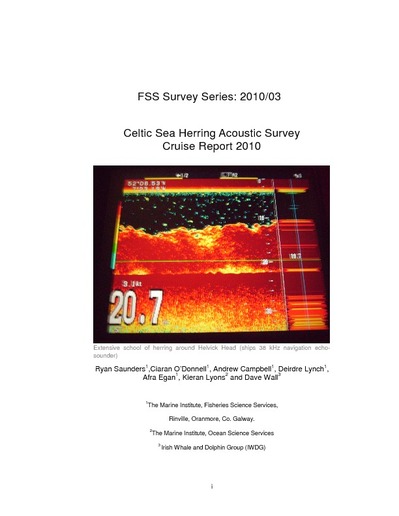 In the southwest of Ireland and the Celtic Sea (ICES Divisions VIIaS, g & j), herring are an important commercial species to the pelagic and polyvalent fleet. The local fleet is composed of dry hold polyvalent vessels and a small number of purpose built Refrigerated seawater vessels (RSW). The stock is composed of both autumn and winter spawning components and the fishery targets pre-spawning and spawning aggregations. The Irish commercial fishery has historically taken place within 1-20 nmi (nautical miles) of the coast and focused on aggregated schools within the spawning cycle. In recent years the larger RSW vessels have actively targeted offshore summer feeding aggregations in the south Celtic Sea. In VIIj, the fishery traditionally begins in mid September and is concentrated within several miles of the shore including many bays and inlets. The VIIaS fishery peaks towards the year end in December, but may be active from mid October depending on location. In VIIg, along the south coast herring are targeted from October to January at a number of known spawning sites and surrounding areas. Overall, the protracted spawning period of the two components extends from October through to January, with annual variation of up to 3 weeks. Spawning occurs in successive waves in a number of well known locations including large-scale grounds and small discreet spawning beds. The stock structure and discrimination of herring in this area has been investigated recently. Hatfield et al. (2007) has shown the Celtic Sea stock to be fairly discrete. However, it is known that fish in the eastern Celtic Sea recruit from nursery areas in the Irish Sea, returning to the Celtic Sea as young adults (Brophy et al. 2002; Molloy et al., 1993). The stock identity of VIIj herring is less clear, though there is evidence that they have linkages with VIIb and VIaS (ICES, 1994; Grainger, 1978). Molloy (1968) identified possible linkages between young fish in VIIj and those of the Celtic Sea herring. For the purpose of stock assessment and management divisions VIIaS, VIIg and VII j have been combined since 1982. For a period in the 1970s and 1980s, larval surveys were conducted for herring in this area. However, since 1989, acoustic surveys have been carried out, and currently are the only tuning indices available for this stock. In the Celtic Sea and VIIj, herring acoustic surveys have been carried out since 1989, and this survey is the 19th in the overall acoustic series or the sixth in the modified time series (i.e. conducted in October). The geographical confines of the annual 21 day survey have been modified in recent years to include areas to the south of the main winter spawning grounds in an effort to identify the whereabouts of winter spawning fish before the annual inshore spawning migration. Spatial resolution of acoustic transects has been increased over the entire south coast survey area. The acoustic component of the survey has been further complimented by detailed hydrographic and marine mammal and seabird work programs first initiated during this survey in 2004.