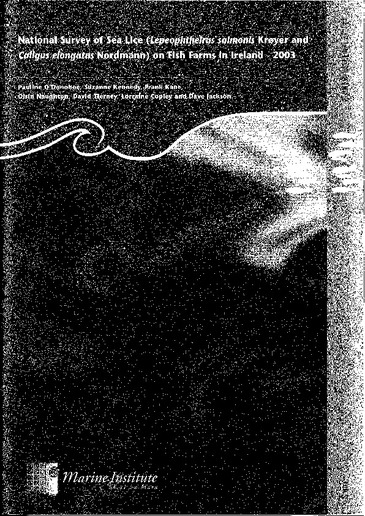 Sea lice are regarded as having the most commercially damaging effect on cultured salmon in the world with major economic losses to the fish farming community resulting per annum (Bristow and Berland, 1991; Jackson and Costello, 1991). They affect salmon in a variety of ways; by reducing fish growth; by causing loss of scales, which leaves the fish open to secondary infections (Wootten et al., 1982); and by damaging the fish, which reduces its marketability. The two species of sea lice found on cultured salmonids in Ireland are Caligus elongatus Nordmann, a species of parasite that infests over 80 different types of marine fish, and Lepeophtheirus salmanis Kroyer, which infests only salmon and other salmonids. L. salmonis is regarded as the more serious parasite of the two species and has been found to occur most frequently on farmed salmon (Jackson and Minchin, 1992). Most of the damage caused by these parasites is thought to be mechanical, carried out during the course of attachment and feeding (Kabata, 1974; Brandal et al., 1976; Jones et al., 1990). Inflammation and hyperplasia (enlargement caused by an abnormal increase in the number of cells in an organ or tissue) have been recorded in Atlantic salmon in response to infections with L. salmonis (Jones et al., 1990; Jonsdottir et al., 1992; Nolan et al., 2000). Increases in stress hormones caused by sea lice infestations have been suggested to increase the susceptibility of fish to infectious diseases (MacKinnon, 1998). Severe erosion around the head caused by heavy infestations of L. salmonis has been recorded previously (Pike, 1989; Berland, 1993). This is thought to occur because of the rich supply of mucus secreted by mucous cell-lined ducts in that region (Nolan et al., 1999). In experimental and field investigations carried out in Norway heavy infestation was found to cause fish mortalities (Finstad et al., 2000).