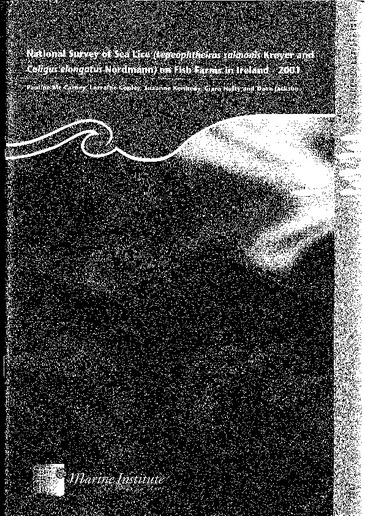 Two species of lice are found on cultured salmonids, Caligus elongatus Nordmann, a species of parasite that infests over fifty different types of marine fishes, and Lepeophtheirus salmonis Krøyer, which infests only salmon and other salmonids. The Salmon Louse (L. salmonis) is regarded as the more serious parasite of the two species and has been found to occur most frequently on Irish farmed salmon (Jackson and Minchin, 1992). Most of the damage caused by these parasites is thought to be mechanical, carried out during the course of attachment and feeding (Kabata, 1974; Brandal et al., 1976; Jones et al., 1990). Inflammation and hyperplasia (enlargement caused by an abnormal increase in the number of cells in an organ or tissue) have been recorded in Atlantic salmon in response to infections with L. salmonis (Jones et al., 1990; Jonsdottir et al., 1992; Nolan et al., 2000). Increases in stress hormones caused by sea lice infestations have been suggested to increase the susceptibility of fish to infectious diseases (MacKinnon, 1998). Severe erosion around the head caused by heavy infestations of L. salmonis has been recorded previously (Pike, 1989; Berland, 1993). This is thought to occur because of the rich supply of mucus secreted by mucous cell-lined ducts in that region (Nolan et al., 1999). In experimental and field investigations carried out in Norway heavy infestation was found to cause fish mortalities (Finstad et al., 2000). Lepeophtheirus salmonis (Caligidae) has a direct life cycle, meaning it uses a single host. After hatching from the egg (which is extruded from the adult female louse in paired egg strings) two free-living nauplii stages are dispersed into the water column. A copepodid stage then follows during which a host must be located before the parasite can develop further. After finding a host the copepodid moults through four chalimus stages, which all occur while the parasite is attached to the host, before developing into a mobile pre-adult male or female. A moult then separates two pre-adult stages after which the fully mature adult develops. The adult female is capable of producing a number of batches of paired egg-strings during her life-span, which in turn hatch into the water column giving rise to the next generation. This gives a total of ten stages through which the parasite must develop to reach adulthood (Kabata, 1979; Schram, 1993). Caligus elongatus is a non-host specific parasite and can be found on many different fish species (Kabata, 1979). It has a similar life cycle to that of L. salmonis (Hogans and Trudeau, 1989). Four groups of farmed fish were examined during sea-lice inspections in 2001. These include rainbow trout, salmon smolts (200 I generation), one sea-winter salmon (2000 generation) and two sea-winter salmon (1999 generation). S1/2's or half year smolts are fish which are transferred to sea in Autumn/Winter of the same year that they are hatched, they smoltify early due to a photoperiod manipulation (Willoughby, 1999). Their S1 siblings smoltify and are put to sea in early spring. S1/2's are included in each year class of fish for the purpose of analyses.