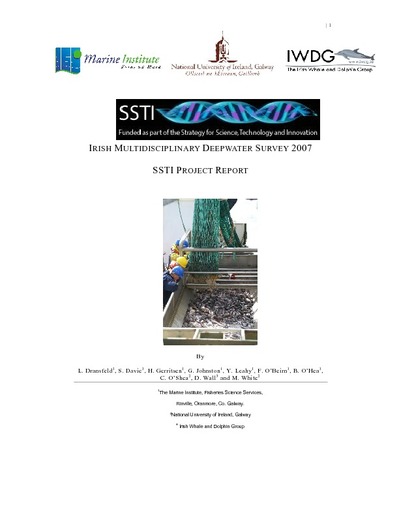 The Marine Institute with the collaboration of the National University of Galway conducted a multidisciplinary deepwater survey along the continental slope of the Northeast Atlantic. At three selected sites northwest of Ireland and on the northern slopes of the Porcupine Bank, fishing transects were carried out at four depth strata (500m, 1000m 1500m and 1800m) during the day, while oceanographic measurements and plankton and benthic invertebrate sampling was carried out during the night. Data from CTD and ADCP measurements showed following distribution of water masses: The top 700 m was occupied by that of Eastern North Atlantic Water (ENAW) origin which is a basic feature of the upper layer hydrography in the Rockall Trough; small salinity maxima indicated the region associated with the core of the shelf edge current (SEC). At Area 6, immediately north of Porcupine Bank, a salinity maximum at a depth of 900-1000 m indicated the presence of Mediterranean Outflow Water (MOW) with the presence Labrador Sea Water (LSW) at 1800-2000 m. The SEC was identified in both CTD and ADCP transects and was characterised by a number of relatively narrow filaments evident in the salinity data. In terms of benthic invertebrate data, a total of 104 taxa were identified with a maximum number of 33 invertebrate taxa identified per haul (these values were recorded at two 1500m hauls in 2006 and 2007, in Areas 5 and 2, respectively). Overall, no clear relationship between the number of invertebrate species and depth was apparent, however there was some indication that the number of species appears to be more variable in deeper waters. Several species occurred in very large numbers; these were the echinoderms, Cidaris cidaris, Benthegone rosea and Stichopus tremulus and the bivalve, Pseudammusium septemradii. Fisheries data revealed distinct deepwater fish communities that changed with depth and to a lesser extent with area. The number of species increased with depth at all sites to reach a maximum at 1500m before decreasing again at 1800m. At 500m depth the fish community was mainly composed of rabbit fish and rattails with some shelf species present such as hake, ling and silver pout. The 1000m depth strata presented a transition of species composition. The most abundant species overall was Roundnose grenadier which had is highest abundance at 1500m in all three areas but could also be found in the 1000 and 18000m depth strata. Other species of high abundance which also had their highest number of individuals at 1500m were Baird’s smoothhead and other species of grenadiers. Cluster analysis revealed that Roundnose grenadier was a distinct species grouping as was that of Baird’s smoothhead. Species occurrences were similar in all three areas with some regional differences; in area 2, Phycis blennoides, greater forkbeard,occurred among the ten most abundant species while in area 5, species, such as Black Scabbard, Aphanopus carbo, and cut throat eel, Synaphobranchus kaupi, were being caught here in larger numbers while present in the other areas in low numbers. Seven comparative tows were carried out with the Scottish research vessels RV Scotia and indicated that overall similar numbers of species and total number of fish were caught. Size distribution also compared well between the two different vessels, however for some species the numbers or size ranges of fish caught differed.