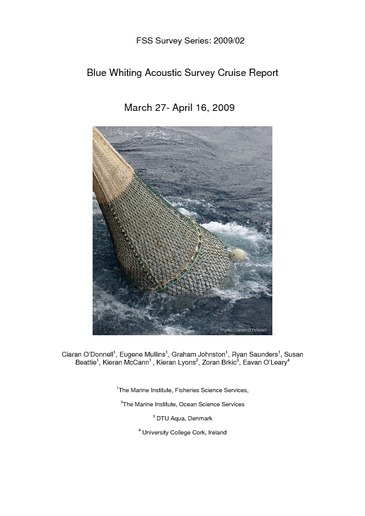 Acoustic surveys on the blue whiting (Micromesistius poutassou) stock in the north east Atlantic have been carried out by the Institute of Marine Research (IMR), Norway since the early 1970s. In the early 1980s a coordinated acoustic survey approach was adopted, with both Russia and Norway participating to estimate the size of this migratory stock within its key spawning grounds. Since 2004, the coordinated survey program has expanded and to include vessels from the EU (Ireland and the Netherlands) and the Faroes. Due to the highly migratory nature of the stock a large geographical area has to be surveyed. Spawning takes place from January through to April along the shelf break and offshore Banks including the Rosemary, Hatton and Rockall Banks. Peak spawning occurs between mid- March and mid April and acoustic surveys are timed to occur during this phase. To facilitate a more coordinated spatio-temporal approach to the survey, participating countries meet annually to discuss survey methods and define target areas at the ICES led Planning Group of Northern Pelagic Ecosystem Surveys (PGNAPES). Data from the annual spawning stock abundance survey (March/April, western waters), juvenile surveys (May, Norwegian Sea and January-March, Barents Sea trawl survey) and commercial landings data are presented annually at the ICES Working Group of Widely Distributed Stocks (WGWDS). Ultimately, combined data inputs into the management and catch advice for this international cross boundary stock. The 2009 survey was part of an International collaborative survey using the vessels RV Celtic Explorer (Ireland), RV Fridtjof Nansen (Russia), RV Tridens (Netherlands) and the RV Magnus Heinason (Faroes) and the FV Brennholm (Norwegian commercial charter). The total combined area coverage in 2009 extended from the Faroe Islands in the north (62°N) to south of Ireland (51.30°N), with east -west extension from 5°-18° W. Combined area coverage included shelf break areas (>250m) and large bathymetric features including the slope areas of the Porcupine, Rockall and Hatton Banks. The Irish component of the survey was made up of transects covering 2,545nmi (nautical miles) covering the slope areas (>250m) of the Hebrides shelf, the eastern fringes of the Rockall Bank, the Rockall Trough and the southern slopes of the Hatton Bank. This survey represents the 6th survey in the Irish time series.