Review of the Potential Mechanisation of Kelp Harvesting in Ireland 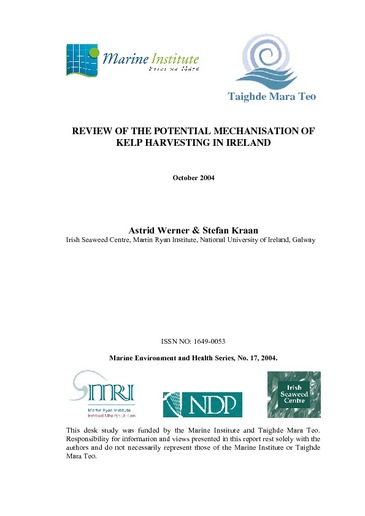 A diverse seaweed industry has developed in Ireland over the past few decades. The seaweed industry today comprises several sectors, such as biopolymers, agriculture/horticulture, cosmetics, thalassotherapy and human consumption, with the former two sectors being of most economic importance. Approximately sixteen seaweed species are commercially utilised, three of which are of particular commercial importance. These are the calcified red algae, referred to as maërl, which mainly comprises of two species (Phymatolithon calcareum and Lithothamnion corallioides) and are exploited by a single company for agricultural, horticultural, food and cosmetic applications. The other bulk species is the brown alga Ascophyllum nodosum, which is used for alginate extraction and agriculture/horticulture applications. The latter species sustains an industry, which is an important factor in contributing to the maintenance of coastal communities especially in rural areas of the west coast, particularly in the Gaeltacht of Connemara (Guiry 1997, National Seaweed Forum, 2000). Mechanical harvesting of seaweeds in Ireland is limited to the exploitation of maërl. At present, one company has a licence to harvest calcified algae in the south-west of Ireland (Bantry Bay) with 8,000 - 10,000 wet tonnes of maërl being extracted from the seabed annually in recent years. The supply of raw material for the Ascophyllum-processing industry as well as for the other industrial sectors relies on harvesters who harvest the seaweed by hand. Although hand-harvesting provides a source of employment in rural areas along the west coast, the age profile is increasing and the numbers of harvesters are declining due to insufficient recruitment of younger harvesters (National Seaweed Forum 2000; Kelly et al. 2001). With growing demands for seaweeds, it is uncertain whether hand-harvesting will provide sufficient raw material in the long-term. The National Seaweed Forum has evaluated the current state of the Irish Seaweed Industry. The forum was launched by the Minister for Marine and Natural Resources in 1999 and consists of 19 members from state agencies, third-level institutions and industry. In the final report (National Seaweed Forum, 2000) it was stated that the natural sustainable seaweed resources in Ireland are under-utilised and the industrial potential, including high-value applications, has not been fully realised. The National Seaweed Forum identified two key areas as being crucial to the development of the Irish seaweed industry: 1) Seaweed aquaculture was assumed to provide the most cost-effective method to meet growing market demand with high-quality seaweed for specific sectors such as human consumption, cosmetics and biotechnology. Additionally, a seaweed aquaculture industry is expected to create attractive and high-skilled jobs, especially in peripheral communities in coastal areas. This is based on the fact that seaweeds of interest to high quality applications are often not bulk species, which are easy to harvest in large amounts. Therefore, with cultivation you strongly increase volume/area, which facilitates harvesting and also standardises quality. Cultivation of a bulk species such as kelp is economically not feasible in Europe. 2) The development and introduction of harvesting machinery suitable for Irish conditions was thought to have a significant impact on the expansion of a viable Irish seaweed industry. As a measure to ensure long-term continuity of raw-material supply of bulk species (e.g. A. nodosum, Laminaria species) the investigation of mechanical harvesting techniques with emphasis on sustainability and environmental impact were prioritised as an R&D area (National Seaweed Forum, 2000). An initial comprehensive study of hand and mechanical harvesting of Ascophyllum nodosum, including an environmental impact assessment, was conducted in the late 1990s (Kelly et al., 2001). In this study, a device similar to the Norwegian Ascophyllum cutter (a flat-bottomed boat fitted with a Vaughan vertical wet-well chopper pump) was used. When hand and mechanical harvesting were compared, there was no significant difference in environmental impact caused by the two methods, but mechanical harvesting was found to be less effective and more expensive than hand harvesting. At present, kelp species in Ireland such as L. digitata, L. saccharina and Alaria esculenta, are harvested by hand but only in small amounts. This means that the natural sustainable resources of kelps of Irish shores are under-utilised. Due to the economic importance of L. digitata and L. hyperborea for alginate extraction and the growing demand for kelp by the phycocolloid and other industries, the introduction of mechanical harvesting is currently being considered for Ireland. Mechanised harvesting enables the harvester to remove large amounts of biomass from an area in a relatively short time. It is therefore essential to develop a suitable management scheme to ensure sustainable exploitation of natural resources and continuous integrity of marine habitats. The objective of the present study is to provide an extensive literature review on kelp research, harvesting and resource management as essential background knowledge for the development of an appropriate management strategy for Ireland. The report addresses the following topics: • Biology of kelps • Biodiversity of kelp forests and ecological significance of kelps • Commercial kelp harvesting in France and Norway (methods, management and environmental impact) • Investigations of kelp in Ireland (Growth rates, biomass, biodiversity of kelp beds, regeneration potential, kelp resources) • Legal framework for seaweed harvesting in Ireland • Conclusions and recommendations

Werner, A. & Kraan, S., "Review of the Potential Mechanisation of Kelp Harvesting in Ireland", Marine Environment and Health Series No. 17, Marine Institute 2004