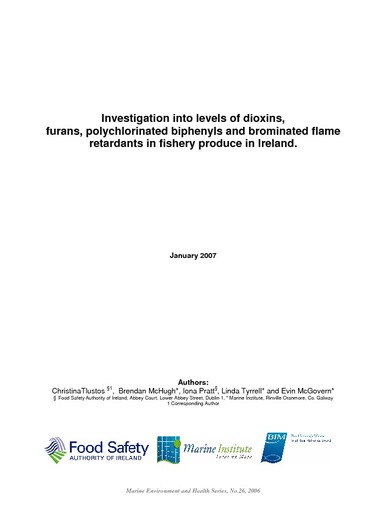 The Food Safety Authority of Ireland in collaboration with the Marine Institute and An Board Iascaigh Mhara (Sea Fisheries Board) has carried out a surveillance study of levels of dioxins (PCDDs), furans (PCDFs) polychlorinated biphenyls (PCBs), and brominated flame retardants (BFRs), specifically polybrominated diphenylethers (PBDEs) and hexabromocyclododecane (HBCD), in a variety of fish species and fishery products, including fresh and processed products available on the Irish market. The study was undertaken because of concern about the possible effects on human health of these bio-persistent environmental contaminants, known to be present in a number of foodstuffs, notably meat, fish, eggs and dairy products. The study showed that levels of PCDDs and PCDFs in Irish fish and fishery products available on the Irish market were well below existing EC legal limits for these contaminants as laid down in Regulation 466/2001. The lowest level was found in a sample of canned tuna (0.012 ng WHO TEQ/kg whole weight) with the highest level found in a farmed salmon sample (0.82 ng WHO TEQ/kg whole weight), compared with the maximum level under the legislation of 4 ng WHO TEQ/kg whole weight. The levels found were also below the new limits for dioxin-like PCBs (dl-PCBs) and for the sum of WHO-TEQs for PCDDs, PCDFs and dioxin-like PCBs, which were introduced in November, 2006 via Regulation 199/2006. The upper-bound mean levels of PCDDs, PCDFs and dioxin-like PCBs expressed as total WHOTEQs ranged from 0.05 – 2.15 ng/kg WHO TEQ whole weight, which can be compared with the new maximum level of 8 ng WHO TEQ/kg whole weight for the sum of PCDDs, PCDFs and dioxin-like PCBs. Results of this study are in line with those from previous FSAI studies on PCDD and PCDF levels in fish and also in meat, milk and eggs, and indicate relatively low levels of these contaminants in fishery produce available in the Irish marketplace. Reductions of PCDD/Fs and dl-PCBs in Irish farmed salmon were observed in comparison to levels measured in a previous FSAI/MI survey in 2001, in which a mean level of 4.02 ng WHO TEQ/kg whole weight was detected compared with 2.15 ng/kg WHO TEQ whole weight in the present study. Similar observations can be made for levels reported in a study carried out by An Board Iascaigh Mhara in 2004, in which a mean level of 1.75 ng WHO TEQ/kg whole weight was reported. Concentrations of brominated flame retardants were also low. The mean PBDE concentrations ranged from <0.31 to 3.71 µg/kg whole weight in canned tuna to farmed salmon respectively. Although there are no acceptable daily intake (ADI) or maximum limits set for PBDEs or HBCD, the levels of these contaminants found in the study were low, and are very unlikely to present a health risk to Irish consumers. Although fish is a recognised dietary source of PCDDs, PCDFs and PCBs, the health benefits of eating fish are well established, and on the basis of these results the FSAI considers that there is no need to alter current advice on fish consumption. Current advice is that consumers should eat two portions of fish a week, one of which should be oily. The full study report follows, providing further sampling details, analytical methodologies and discussion of the resulting datasets.