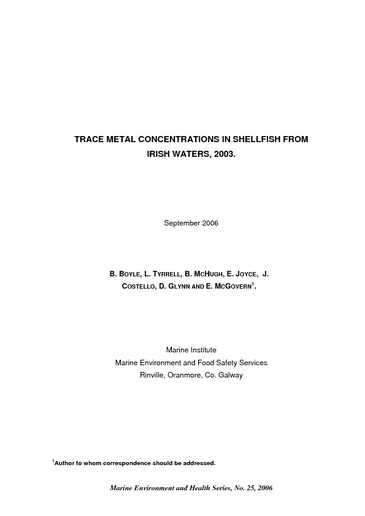 In accordance with the monitoring requirements of Council Directive 79/923/EEC, on the quality required of shellfish waters, and Council Directive 91/492/EEC, laying down the health conditions for the production and placing on the market of live bivalve molluscs, water samples from major shellfish growing areas were tested for physicochemical parameters and shellfish were tested for trace metal levels. In 2003, a total of 30 samples were analysed for trace metals. All mercury concentrations measured were below or close to the limit of quantification, 0.03 mg/kg wet weight, which is well within the European maximum level of 0.50 mg/kg wet weight for mercury in bivalve molluscs. Levels of lead were typically low, with a mean of 0.26 mg/kg wet weight and maxima of 1.04 mg/kg wet weight, also below the respective European maximum level of 1.50 mg/kg wet weight. In addition, levels of cadmium were all below the European maximum level of 1 mg/kg wet weight, though the level of cadmium determined at Castlegregory in Tralee Bay was 0.97 mg/kg, close to the European limit. Castlegregory has not been included in the sampling programme since 1994, but will be included in future monitoring. There are no internationally agreed standards or guidelines available for the remaining trace metals in shellfish. A compilation by the OSPAR Commission of standard and guidance values applied by member states of OSPAR indicated the Spanish standard for copper in shellfish of 20 mg/kg wet weight to be the strictest available. This excludes oysters for which a higher standard of 60 mg/kg wet weight has been set, as oysters accumulate copper to higher levels. All copper results were within these Spanish standards. The results obtained provide evidence of the clean, unpolluted nature of Irish shellfish and shellfish producing waters. As in previous years, the water quality from shellfish growing areas was good and conformed to the requirements of the Directive. Petroleum hydrocarbons were not visible in any of the shellfish waters or as deposits on the shellfish. This survey confirms previous studies (Glynn et al., 2004, 2003a, 2003b; McGovern et al., 2001; Bloxham et al., 1998; Smyth et al., 1997 and Nixon et al., 1995, 1994, and 1991), which show that contamination from trace metals is low in Irish shellfish aquaculture.