An Epidemiological Investigation of the Re-Emergence of Pancreas Disease in Irish Farmed Atlantic Salmon (Salmo salar L.) in 2002 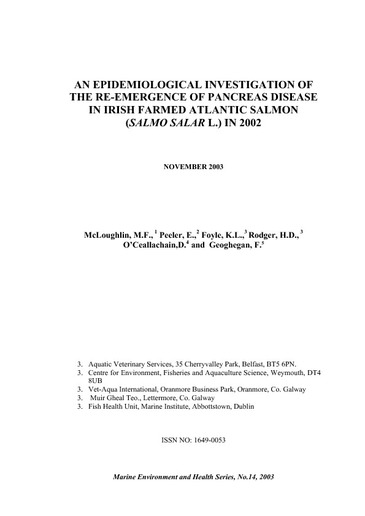 In the early 1990’s pancreas disease (PD) was shown to be the most significant cause of mortality in Irish farmed salmon (Wheatley et al., 1995, Menzies et al., 1996, Crockford et al., 1999). At that time the aetiology of PD was uncertain but in 1995 it was conclusively shown that PD was caused by a virus subsequently named salmon pancreas disease virus (SPDV), (Nelson et al., 1995, McLoughlin et al., 1996). It has since been further classified and named salmonid alphavirus (Weston et al., 1999, Weston et al., 2002). The clinical and histopathological features of naturally occurring pancreas disease in farmed Atlantic salmon in Ireland were described by Murphy et al., 1992 and McLoughlin et al., 2002. The original epidemiological studies of PD in Ireland indicated that mortality rates up to 48% have occurred in farmed Atlantic salmon in their first year in the sea on some individual fish farms (Menzies et al., 1996). PD was recorded in over 70% of marine sites monitored and the majority of PD outbreaks occurred during August to October (Crockford et al., 1999). A serological survey for the presence of SPDV antibody in 1996 revealed 53% of the sites (9/17) were positive and that not all positive sites had recognised clinical signs of PD. This indicated a relatively low incidence and severity of PD at that time (McLoughlin et al., 1998). This pattern persisted until 2002 when there was a serious increase in both the incidence and severity of PD reported on farmed Atlantic salmon marine sites in Ireland. In order to identify factors associated with this re-emergence of PD in Irish farmed salmon, an in-depth epidemiological investigation was carried out on all marine sites. In trying to identify the cause of a disease from epidemiological studies the concept of time, place and individual is paramount, i.e. why did a particular disease occur in a particular animal or group of animals at a particular time in a particular place? Epidemiological study designs are chosen so that predictor variables are measured in affected and non-affected “units”. These “units” may be cells, animals, pens, farms or countries. The association between these predictor variables and disease is then examined. Where associations are demonstrated then risk factors for disease can be identified. A risk factor is a predictor variable associated with the disease. However the identification of a risk factor does not imply causation. The strength, consistency, temporality and dose response effect of the risk factor add weight to it being causal but only an intervention study where the risk factor is added or omitted can confirm this. Individual or univariate analysis of the relationship between a predictor variable and disease may result in an association being demonstrated. However it is dangerous to read too much into univariate analyses as factors which have been ignored, not measured or not seen as important may have a confounding effect. Multivariate analysis is used to try to provide estimates of association adjusted for the effect of confounding factors is a much more accurate and powerful epidemiological tool, but was of limited application in this snapshot survey of a single production cycle. This report aims to describe the occurrence and severity of PD in Irish farmed salmon in 2002-2003 and to identify risk factors associated with the re-emergence of severe PD. Finally, recommendations are made on how PD can be managed to reduce its serious impact on the health, welfare and productivity of Irish farmed salmon.