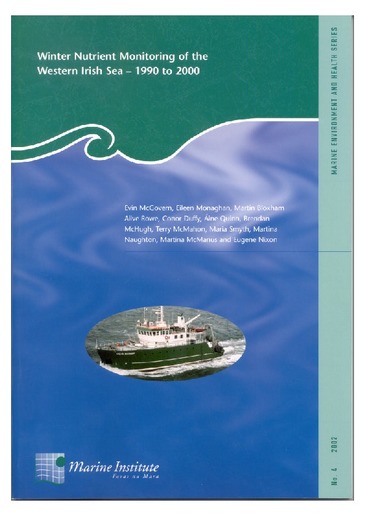 Winter nutrient concentrations in the western Irish Sea have been monitored annually from 1990 to 2000. Surface samples have been taken between Dundalk Bay and Carnsore Point and analysed for total oxidised nitrogen (TOxN), ortho-phosphate (ortho-P), silicate and salinity. More recently monitoring has been extended into the Celtic Sea. Data from this monitoring programme are presented in detail, along with comparisons to existing data sets. The spatial distribution of nutrients and salinity are presented for each year in contour or classed plots (depending on sample coverage for the particular year). Salinity values were representative of those expected in the Irish Sea and TOxN, ortho-P and silicate values were in general agreement with previous studies. A short summary of studies on nutrient levels in estuaries on the western Irish Sea is presented. In addition, riverine input data supplied by the Environmental Protection Agency (EPA) is used to evaluate the relative magnitude of nutrient inputs from riverine and oceanic sources. Nutrient concentrations are considered using an ecological quality objectives (EcoQOs) approach, proposed as part of the Oslo Paris Convention’s (OSPAR) ‘Common Procedure for Identification of the Eutrophication Status of the Maritime Area’, in partial consideration of the trophic status of the western Irish Sea. Although there is evidence for nutrient enrichment in some estuarine waters and possibly to a lesser extent in some coastal waters, there is little evidence for generally elevated nutrient levels in coastal and offshore waters in the western Irish Sea. Salinity regression curves were calculated for TOxN and ortho-P values in order to generate salinity-normalised concentrations for trend determinations. Regression and trend analysis were carried out on the sample area as a whole and also on regions defining the north, mid, and south western Irish Sea. Trend analysis has been performed, based on nutrient-salinity regressions, using Trend-Y-Tector. A decrease in TOxN over the study period (ranging from 4 to13%) is observed in all regions analysed with the exception of the south west Irish Sea, where a 5% increase was indicated. Analysis of trends in ortho-P concentration showing decreasing trends ranging from 20 to 33%. On visual examination, trends in TOxN are not as intuitively apparent as trends in ortho-P concentrations, therefore it may not be prudent to draw conclusions from them at this stage. Trend analysis of riverine inputs shows an increase in TOxN by 17% and no apparent trend in ortho-P levels. These trends are not consistent with trends observed in the Irish Sea. On the basis of this assessment, it is recommended that this monitoring be continued. The design of future nutrient monitoring surveys is considered, with a view to improving the efficacy of the monitoring regime.