Report on the Sea and Inland Fisheries of Ireland for 1904. Part II - Scientific Investigations 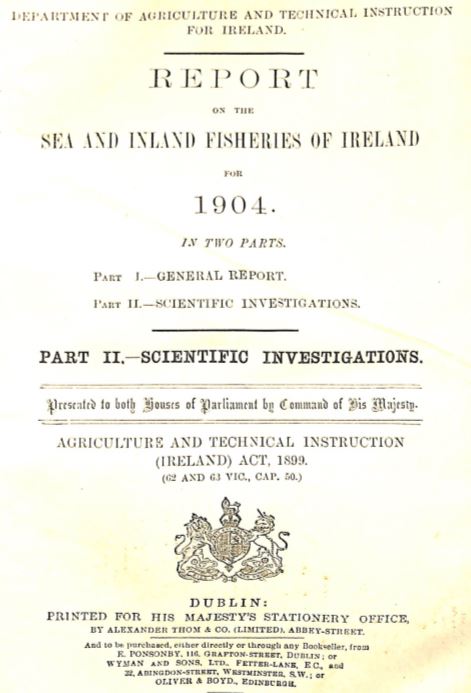 I. The Marine Fauna of the West Coast of Ireland, Part IV. Cumacea, by W T. Calman, D.Sc., Plates I to V. * II. The Marine Fauna of the Coast of Ireland, Part V. Isopoda, by W. M. Tattersail, B.Sc., Plates I to XI. * III. A list of the Marine Copepoda of Ireland, Part I, Littoral Forms and Fish Parasites, by Joseph Pearsou, B. Sc. * IV. The Marine Fauna of the Coast of Ireland, Part VI. Pyenogonida, by Prof. George H. Carpenter, B.Sc., M.R.I.A., Plates I to III. * V. Schizopodous Crustacea from the North-East Atlantic Slope. Supplement, by E. W. L. Holt and W. M. Tattersall, B.Sc., Plates I to V. * VI. i.— Plankton collected at Irish Light Stations in 1904, by Lewis Henry Gough, Ph.D. ii.—Hydrographical Observations at Irish Light Stations, 1904, * Inland Fisheries * VII. Inland Fisheries. i. —Report on the Artificial Propagation of Salmonidae during the Season of 1901-1905, by E. W. L. Holt,. ii. —Observations on the Spawning Season of the Rainbow Trout, by C. Arens, Fisheulturist, Cleysingen, Germany, (.Translation), iii. —Record of Salmon Marking Experiments in Ireland, 1902-1905, by A. B. E. Hillas, B.A., iv. —Statistical Information relating to the Salmon Fisheries, v. —Substance of Reports received from Clerks of Conservators relative to Salmon Fisheries *

Department of Agriculture and Technical Instruction for Ireland (1904). Report on the Sea and Inland Fisheries of Ireland for 1904, Part II - Scientific Investigations. Dublin: The Stationery Office.