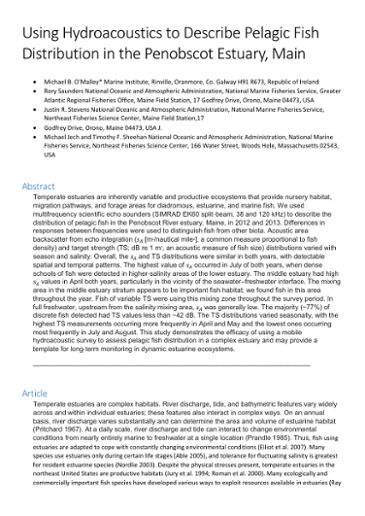 Temperate estuaries are inherently variable and productive ecosystems that provide nursery habitat, migration pathways, and forage areas for diadromous, estuarine, and marine fish. We used multifrequency scientific echo sounders (SIMRAD EK60 split‐beam, 38 and 120 kHz) to describe the distribution of pelagic fish in the Penobscot River estuary, Maine, in 2012 and 2013. Differences in responses between frequencies were used to distinguish fish from other biota. Acoustic area backscatter from echo integration (sA [m2/nautical mile2], a common measure proportional to fish density) and target strength (TS; dB re 1 m2, an acoustic measure of fish size) distributions varied with season and salinity. Overall, the sA and TS distributions were similar in both years, with detectable spatial and temporal patterns. The highest value of sA occurred in July of both years, when dense schools of fish were detected in higher‐salinity areas of the lower estuary. The middle estuary had high sA values in April both years, particularly in the vicinity of the seawater–freshwater interface. The mixing area in the middle estuary stratum appears to be important fish habitat; we found fish in this area throughout the year. Fish of variable TS were using this mixing zone throughout the survey period. In full freshwater, upstream from the salinity mixing area, sA was generally low. The majority (~77%) of discrete fish detected had TS values less than −42 dB. The TS distributions varied seasonally, with the highest TS measurements occurring more frequently in April and May and the lowest ones occurring most frequently in July and August. This study demonstrates the efficacy of using a mobile hydroacoustic survey to assess pelagic fish distribution in a complex estuary and may provide a template for long‐term monitoring in dynamic estuarine ecosystems.

Peer-reviewed This is an Accepted Manuscript of an article published by Taylor & Francis in Using Hydroacoustics to Describe Pelagic Fish Distribution in the Penobscot Estuary, Maine on 20 June 2017, available online: https://doi.org/10.1080/00028487.2017.1308883