Amnesic shellfish poisoning in the king scallop, Pecten maximus, from the west coast of Scotland 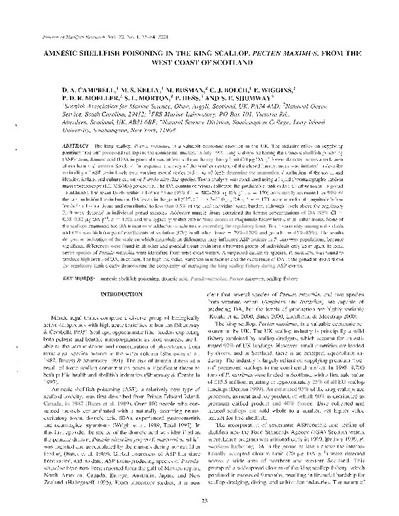 The king scallop, Pecten maximus, is a valuable economic resource in the UK. The industry relies on supplying premium "roe-on" processed scallops to the continental market. In July 1999, king scallops harboring the amnesic shellfish poisoning (ASP) toxin, domnic acid (DA), in gonadal tissue at levels above the regulatory limit (20 μg DA g-1) were detected across a wide area of northern and western Scotland. In response, a survey of the southern extent of the closed harvest areas was initiated to describe variability of ASP toxin levels over varying spatial scales (<5 m to >5 km); determine the anatomical distribution of the toxin, and identify, isolate, and culture causative Pseudo-nitzschia species. Toxin analysis was conducted using a liquid chromatography-tandem mass spectroscopy (LC-MS/MS) procedure. The DA content of tissues followed the predictable rank order: all other tissue -1 gonad -1 adductor. The toxin levels within all other tissue (95% Cl = 580-760 μg DA g-1, n = 170) consistently accounted for 99% of the total individual toxin burden. DA levels in the gonad (95% CI = 8.2-11.0 μg DA g- 1, n = 170) were an order of magnitude below levels in all other tissue and contributed to less than 0.5% of the total individual toxin burden, although levels above the regulatory limit were detected in individual gonad samples. Adductor muscle tissue contained the lowest concentration of DA (95% Cl = 0.38-0.82 μg DA g- 1, n = 170), and was typically within two to three orders of magnitude below levels in all other tissue. None of the scallops examined had DA toxicities in adductor muscle tissue exceeding the regulatory limit. Toxin variability among individuals and sites was high (range of coefficients of variation (CV) in all other tissue = 29&-l20% and gonadal = 45%-85%). The results do give an indication of the scale on which microhabitat differences may influence ASP toxicity in P. maximus populations, because significant differences were found in all other and gonadal tissue toxin levels between groups of individuals only 25-m apart. In total, seven species of Pseudo-nitzschia were identified from west coast waters. A suspected causative species, P. australis, was found to produce high levels of DA, in culture. The high individual variation in toxicities and the occurrence of DA in the gonad at levels above the regula1ory limit clearly demonstrate the complexity of managing the king scallop fishery during ASP events.

Copyright © 2001 D.A. Campbell et al. This is distributed under the Creative Commons Attribution License, which permits use provided the original work is properly cited. Peer reviewed.