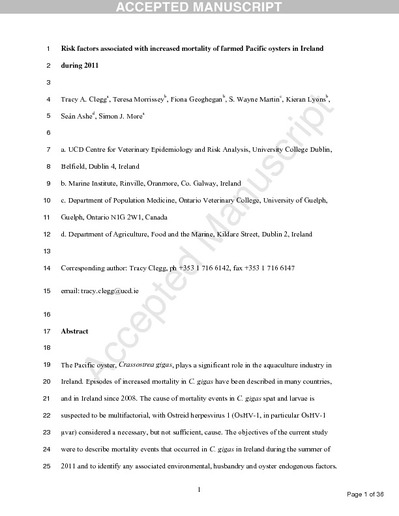 The Pacific oyster, Crassostrea gigas, plays a significant role in the aquaculture industry in Ireland. Episodes of increased mortality in C. gigas have been described in many countries, and in Ireland since 2008. The cause of mortality events in C. gigas spat and larvae is suspected to be multifactorial, with ostreid herpesvirus 1 (OsHV-1, in particular OsHV-1 μvar) considered a necessary, but not sufficient, cause. The objectives of the current study were to describe mortality events that occurred in C. gigas in Ireland during the summer of 2011 and to identify any associated environmental, husbandry and oyster endogenous factors. A prospective cohort study was conducted during 2010–2012, involving 80 study batches, located at 24 sites within 17 bays. All 17 bays had previously tested positive for OsHV-1 μvar. All study farmers were initially surveyed to gather relevant data on each study batch, which was then tracked from placement in the bay to first grading. The outcome of interest was cumulative batch-level mortality (%). Environmental data at high and low mortality sites were compared, and a risk factor analysis, using a multiple linear regression mixed effects model, was conducted. Cumulative batch mortality ranged from 2% to 100% (median = 16%, interquartile range: 10–34%). The final multivariable risk factor model indicated that batches imported from French hatcheries had significantly lower mortalities than non-French hatcheries; sites which tested negative for OsHV-1 μvar during the study had significantly lower mortalities than sites which tested positive and mortalities increased with temperature until a peak was reached. There were several differences between the seed stocks from French and non-French hatcheries, including prior OsHV-1 μvar exposure and ploidy. A range of risk factors relating to farm management were also considered, but were not found significant. The relative importance of prior OsHV-1 μvar infection and ploidy will become clearer with ongoing selection towards OsHV-1 μvar resistant oysters. Work is currently underway in Ireland to investigate these factors further, by tracking seed from various hatchery sources which were put to sea in 2012 under similar husbandry and environmental conditions.