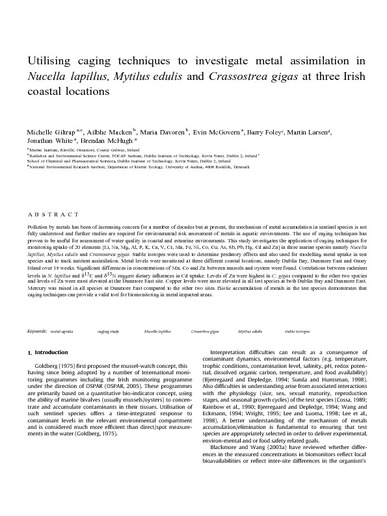 Pollution by metals has been of increasing concern for a number of decades but at present, the mechanism of metal accumulation in sentinel species is not fully understood and further studies are required for environmental risk assessment of metals in aquatic environments. The use of caging techniques has proven to be useful for assessment of water quality in coastal and estuarine environments. This study investigates the application of caging techniques for monitoring uptake of 20 elements [Li, Na, Mg, Al, P, K, Ca, V, Cr, Mn, Fe, Ni, Co, Cu, As, Sb, Pb, Hg, Cd and Zn] in three marine species namely Nucella lapillus, Mytilus edulis and Crassostrea gigas. Stable isotopes were used to determine predatory effects and also used for modelling metal uptake in test species and to track nutrient assimilation. Metal levels were monitored at three different coastal locations, namely Dublin Bay, Dunmore East and Omey Island over 18 weeks. Significant differences in concentrations of Mn, Co and Zn between mussels and oysters were found. Correlations between cadmium levels in N. lapillus and δ13C and δ15N suggest dietary influences in Cd uptake. Levels of Zn were highest in C. gigas compared to the other two species and levels of Zn were most elevated at the Dunmore East site. Copper levels were more elevated in all test species at both Dublin Bay and Dunmore East. Mercury was raised in all species at Dunmore East compared to the other two sites. Biotic accumulation of metals in the test species demonstrates that caging techniques can provide a valid tool for biomonitoring in metal impacted areas.