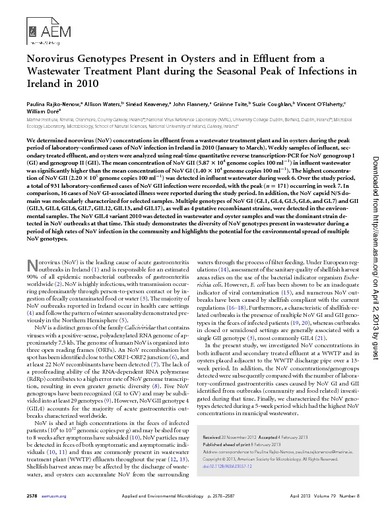 We determined norovirus (NoV) concentrations in effluent from a wastewater treatment plant and in oysters during the peak period of laboratory-confirmed cases of NoV infection in Ireland in 2010 (January to March). Weekly samples of influent, secondary treated effluent, and oysters were analyzed using real-time quantitative reverse transcription-PCR for NoV genogroup I (GI) and genogroup II (GII). The mean concentration of NoV GII (5.87 104 genome copies 100 ml 1) in influent wastewater was significantly higher than the mean concentration of NoV GI (1.40 104 genome copies 100 ml 1). The highest concentration of NoV GII (2.20 105 genome copies 100 ml 1) was detected in influent wastewater during week 6. Over the study period, a total of 931 laboratory-confirmed cases of NoV GII infection were recorded, with the peak (n 171) occurring in week 7. In comparison, 16 cases of NoV GI-associated illness were reported during the study period. In addition, the NoV capsid N/S domain was molecularly characterized for selected samples. Multiple genotypes of NoV GI (GI.1, GI.4, GI.5, GI.6, and GI.7) and GII (GII.3, GII.4, GII.6, GII.7, GII.12, GII.13, and GII.17), as well as 4 putative recombinant strains, were detected in the environmental samples. The NoV GII.4 variant 2010 was detected in wastewater and oyster samples and was the dominant strain detected in NoV outbreaks at that time. This study demonstrates the diversity of NoV genotypes present in wastewater during a period of high rates of NoV infection in the community and highlights the potential for the environmental spread of multiple NoV genotypes.