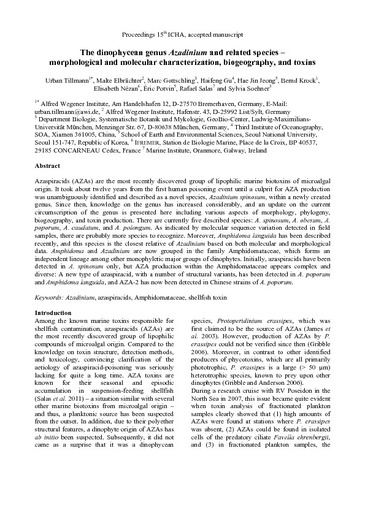 International Society for the Study of Harmful Algae
﻿

Azaspiracids (AZAs) are the most recently discovered group of lipophilic marine biotoxins of microalgal origin. It took about twelve years from the first human poisoning event until a culprit for AZA production was unambiguously identified and described as a novel species, Azadinium spinosum, within a newly created genus. Since then, knowledge on the genus has increased considerably, and an update on the current circumscription of the genus is presented here including various aspects of morphology, phylogeny, biogeography, and toxin production. There are currently five described species: A. spinosum, A. obesum, A. poporum, A. caudatum, and A. polongum. As indicated by molecular sequence variation detected in field samples, there are probably more species to recognize. Moreover, Amphidoma languida has been described recently, and this species is the closest relative of Azadinium based on both molecular and morphological data. Amphidoma and Azadinium are now grouped in the family Amphidomataceae, which forms an independent lineage among other monophyletic major groups of dinophytes. Initially, azaspiracids have been detected in A. spinosum only, but AZA production within the Amphidomataceae appears complex and diverse: A new type of azaspiracid, with a number of structural variants, has been detected in A. poporum and Amphidoma languida, and AZA-2 has now been detected in Chinese strains of A. poporum.