The response of North Atlantic diadromous fish to multiple stressors including land use change: a multidecadal study 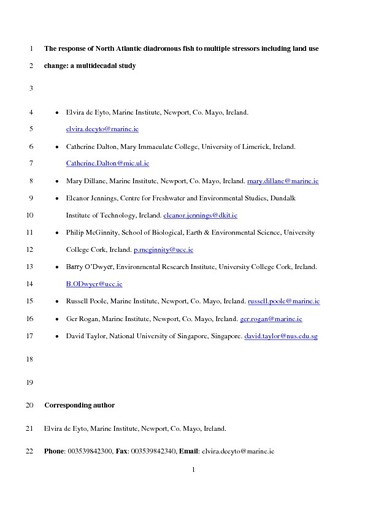 Reduction of freshwater habitat quality due to land use change can have significant impacts on diadromous fish. Partitioning this impact from other potential drivers, such as changing marine conditions and climate, is hampered by a lack of long term datasets. Here, four decades of data were used to assess the impact of land use change on Salmo salar L. and anadromous Salmo trutta L. in the Burrishoole catchment, Ireland, one of the few index sites for diadromous fish in the North Atlantic. Land use change was found to have no significant impact on the freshwater survival of either salmon or trout. However, climate impacted significantly on the survival of salmon and trout in freshwater, with poor survival in years with wetter warmer winters, coinciding with positive North Atlantic Oscillation values. Additionally, cold springs were associated with higher survival in trout. The addition of hatchery salmon into the salmon spawning cohort coincided with low freshwater survival. Our results highlight the necessity for a broad ecosystem approach in any conservation effort of these species.