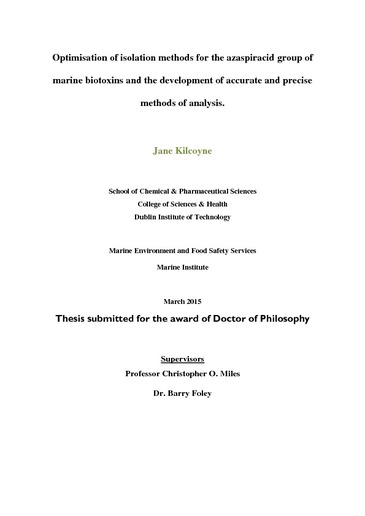 The two main groups of biotoxins which affect the Irish shellfish industry are azaspiracids (AZAs) and the okadaic acid (OA) group (OA, DTX2, DTX1 and their esters) toxins. Since AZAs were first identified in 1998, well over 30 analogues have been reported. Structural and toxicological data have been described for AZA1–5 (isolated from shellfish). LC-MS/MS is the EU reference method for detection of the AZAs (AZA1, -2 and -3) and the OA group toxins in raw shellfish with the regulatory limit set at 160 μg/kg for each toxin group. Limited supplies of purified toxins for certified reference materials (CRMs) were available for AZA1−3. Little knowledge was also available on the relevance of the additional AZA analogues that had been reported, in terms of human health protection. The analysis of marine biotoxins by LC-MS/MS can be severely affected by matrix interferences. Here, a study was performed on two instruments; a quadrapole time of flight (QToF) and a triple stage quadrupole (TSQ) to assess matrix interferences for AZA1 and OA using a number of tissue types. Enhancement was observed for OA on the QToF while matrix suppression was observed for AZA1 on TSQ. The enhancement on the QToF was overcome by use of an on-line SPE method and matrix matched calibrants, while the suppression on the TSQ was found to be due to late eluting compounds from previous injections and was overcome by employing either a column flush method or an alkaline mobile phase.The isolation of 11 AZA analogues (AZA1−10 and 37-epi-AZA1) from shellfish using an improved procedure (7 steps) is described. Recoveries increased ~2-fold (~ 52%) from previously described isolation procedures. The preparative isolation procedure developed for shellfish was optimised for Azadinium spinosum bulk culture extracts such that only four steps were necessary to obtain purified AZA1 and -2. A purification efficiency of ~70% was achieved, and isolation from 1,200 L of culture yielded 9.3 mg of AZA1 and 2.2 mg of AZA2 (purities >95%). This work demonstrated the feasibility of sustainably producing AZA1 and -2 from A. spinosum cultures. In addition to AZA1 and -2, the novel analogues AZA33, -34 were isolated (also from A. spinosum).Sufficient quantities were purified to enable full structural elucidation, the preparation of reference standards and CRMs, and toxicity studies. Nine of these analogues were fully characterised for the first time (Table 7.1). Structural determination was achieved by NMR and chemical analysis, while toxicity was assessed using the Jurkat T lymphocyte cell assay, mouse intraperitoneal (AZA1−3 and -6) and mouse oral (AZA1−3) administration.The preparation of reference standards for the analogues AZA4−10, 37-epi-AZA1, AZA33 and -34 enabled their relevance in terms of human health protection to be determined. The in vitro and in vivo toxicity studies performed confirmed AZA toxicity.The results from the oral and intraperitoneal mice studies correlated very well, contradicting previous reports and showing that AZA1 is more toxic than AZA2 and -3 and that AZA6 is slightly less toxic than AZA1. Analysis of shellfish (Mytilus edulis) submitted to the Irish biotoxin monitoring programme using the reference standards confirmed previous reports showing that levels of AZA3, -4, -6 and -9 increase following cooking due to heat induced decarboxylation of AZA17, -21, -19 and -23. Very high levels of AZA3 (up to 3-fold that of AZA1) and -6 (up to 3- fold that of AZA2) were detected in some samples (with levels varying most likely due to different rates of metabolism and time of harvesting). As the concentrations of AZA3 and -6 are negligible in raw mussels, yet can increase significantly during the cooking of mussels, the overall concentrations are underestimated by methods used according to current legislation. In cooked shellfish the AZA analogues -4, -5, -7–10, as well as AZA33 and -34, comprise on average ~5% of the total AZA content, however in some samples levels of AZA4 were higher than AZA6. Levels of the 37-epimers in the cooked shellfish extracts were ~ 15% that of the parent analogues.

Kilcoyle, J. (2015). Optimisation of isolation methods for the azaspiracid group of marine biotoxins and the development of accurate and precise methods of analysis. Dublin Institute of Technology