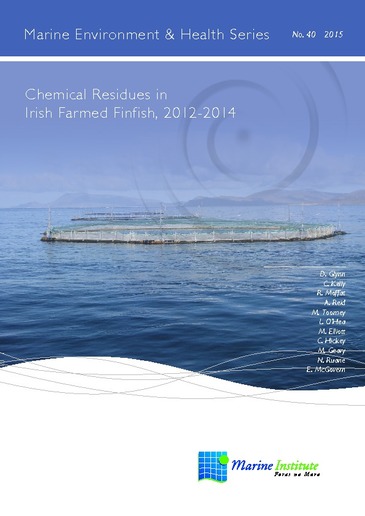 The Marine Institute carries out monitoring of chemical residues in aquaculture in accordance with Council Directive 96/23/EC of 29 April 1996, on measures to monitor certain substances and residues thereof in animals and animal products, also known as the Residues Directive. This is carried out on behalf of the Department of Agriculture, Food and the Marine (DAFM). For the aquaculture sector, the Sea Fisheries Protection Authority (SFPA) with technical support from the Institute is responsible for residue controls on farmed finfish on behalf of the national residue monitoring plan. Annually, the National Residues Control Plan (NRCP) for Aquaculture is prepared by the Institute and this sets out the monitoring requirements for residues in animal products in required by the directive. The main objectives of the National Residue Control Plan for Aquaculture is to ensure farmed fish are fit for human consumption; to provide a body of data showing that Irish farmed fish is of high quality; to promote good practices in aquaculture; and to comply with EU Directive 96/23/EC. Based on production tonnage, the following species for the period of 2012 to 2014 were sampled and tested: Atlantic salmon (Salmo salar), freshwater and sea reared trout (Oncorhynchus mykiss & Salmo trutta). In excess of 2,141 tests and a total of 4,972 residue measurements were carried out over this three year period. Tests were carried out for banned substances such as growth promoters and other unauthorised substances such as malachite green, which should not be present. Harvest fish were also tested for authorised veterinary treatments such as antibiotics and sea lice treatments, environmental contaminants such as trace metals, polychlorinated biphenyls and organochlorine pesticides, to check for compliance with Maximum Residue Levels (MRL) where available. As in previous years, no non-compliant results were reported in the surveillance monitoring programme for farmed finfish during the period 2012 to 2014. Overall, in recent years the outcome for aquaculture remains one of consistently low occurrence of residues in farmed finfish, with 0.23% non-compliant results from routine targeted monitoring in 2004, 0.09% in 2005 and one of full compliance with 0% non-compliant target residue results for the period 2006-2014.